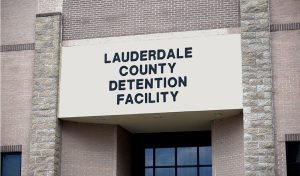 In an effort to best serve the County of Lauderdale and its citizens, the Lauderdale County Detention Facility, operated by the Lauderdale County Sheriff’s Department, serves as a holding facility for pre-trial suspects to assure their appearance at trial or other judicial proceedings, and to hold short-term convicted offenders until their lawful release and state prisoners until their transfer. The Lauderdale County Sheriff’s Department will take the necessary steps to maintain safe, secure and humane custody of confined individuals during their confinement, complying with all applicable federal, state and local statutes.

A fully staffed Medical Department in the Lauderdale County Detention Center gives prompt medical care and is available to the inmates around the clock.

Visitation:
Visitation is on a two week rotation and each inmate is allowed 30 minutes to visit with family or friends. You need to call 601.282.3064 to get the appropriate time and date for your visit.